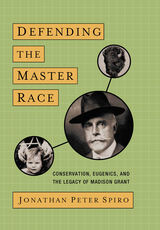 Scholars have labeled Madison Grant everything from the “nation’s most influential racist” to the “greatest conservationist that ever lived.” His life illuminates early twentieth-century America as it was heading toward the American Century, and his legacy is still very much with us today, from the speeches of immigrant-bashing politicians to the international efforts to arrest climate change. This insightful biography shows how Grant worked side-by-side with figures such as Theodore Roosevelt to found the Bronx Zoo, preserve the California redwoods, and save the American bison from extinction. But Grant was also the leader of the eugenics movement in the United States. He popularized the infamous notions that the blond-haired, blue-eyed Nordics were the “master race” and that the state should eliminate members of inferior races who were of no value to the community. Grant’s behind-the-scenes machina­tions convinced Congress to enact the immigration restriction legis­lation of the 1920s, and his influence led many states to ban interracial marriage and sterilize thousands of “unworthy” citizens. Although most of the relevant archival materials on Madison Grant have mysteriously disappeared over the decades, Jonathan Spiro has devoted many years to reconstructing the hitherto concealed events of Grant’s life. His astonishing feat of detective work re­veals how the founder of the Bronx Zoo wound up writing the book that Adolf Hitler declared was his “bible.”
AUTHOR BIOGRAPHY
JONATHAN SPIRO is a professor of history at Castleton State College in Vermont.
REVIEWS
“Spiro’s text is organized by theme, sacrificing clear chronology for a better grasp of Grant’s pervasive influence—a worthwhile trade that keeps the narrative comprehensive and enlightening, peeling back layers of history to expose America’s casual racism and the disturbing ways American law set the precedent for Nazi atrocities. A superb reintroduction to one of America's most complex modern figures.”—Publishers Weekly


“In this exhaustively researched biography, Spiro masterfully details Grant’s ideas and accomplishments with wit and style. . . .Grant has long deserved better than he has gotten from historians and at long last Jonathan Spiro has given Madison Grant exactly what he deserved.”—Journal of the History of Biology


“In spotlighting the connection between wildlife management and eugenics, Spiro has put his finger on something important. The obsession with improving breeding stock linked Grant with Hitler on the right and with other more respectable eugenicists on the left, including Margaret Sanger (who promoted birth control) and Theodore Roosevelt (who hated it).”—The New Republic


Madison Grant: The Consensus • Introduction • THE EVOLUTION OF SCIENTIFIC RACISM • Big-Game Hunter • The Bronx Zoo • From Conservation to Preservation • Wildlife Management • From Mammals to Man • The Eugenics Creed • CONSERVING THE NORDICS • The Passing of the Great Race • Grant’s Disciples • Creating the Refuge • Culling the Herd • Saving the Redwoods • EXTINCTION • Nordic and Anti-Nordic • The Empire Crumbles • The Ever Widening Circle: The Third Reich • The Passing of the Great Patrician • Appendixes • Organizations Served by Madison Grant in an Executive Capacity • The Interlocking Directorate of Wildlife Conservation • Selected Members of the Advisory Council of the ECUSA • Selected Members of the Interlocking Directorate of Scientific Racism • Key to Archival Collections • Notes • Works Cited • Index • Notes • Works Cited • Index