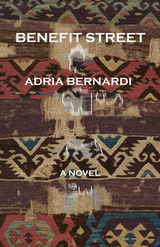 A universal story of exile, of the refugee and emigrant, and of all those displaced who can reconstruct a sense of home only by weaving a new fabric of the imagination

For nearly two decades, Şiva has met after work on Tuesdays with four friends at a teahouse called the Kafiye. In interrupted conversations, the women explore what it is to live engaged lives inside and outside the home. Amidst joking and complaints, while drinking too much tea and eating too many sweets, they tell of their days: a son’s ninth birthday, the bruise on the arm of an aging parent, soldiers stationed outside the school, the funeral of an opposition political leader killed in a mysterious car accident.

Set in an unnamed provincial capital of an unnamed country, Benefit Street tells of a wide circle of friends—teachers, lawyers, missionaries, doctors, artisans—in a time of gathering and dispersal. It tells the story of mothers, daughters, sisters, wives, colleagues, and neighbors, as war to the East threatens and constitutional rights are daily eroded by an increasingly authoritarian regime.

The ideals of youth, freedom, and coexistence are severely tested with the shocking revelation that the charismatic leader of their group has sexually abused the women under his care. The limits of reconciliation are tested as Şiva makes an arduous journey into the mountains to meet an estranged mother with a genius for weaving complex rugs.
AUTHOR BIOGRAPHY
Adria Bernardi is a writer and translator whose publications include an oral history, a collection of essays, a collection of short stories, and two novels. Her work has been awarded the Bakeless Prize for fiction, the Drue Heinz Literature Prize, and the Raiziss/de Palchi Translation Award. She lives in Nashville.

REVIEWS
“A lyric marvel of a book is Benefit Street and what a pleasure to trace the warp and weft of its splendid tapestry. A community of women, their longings and terrors interwoven with children, husbands, histories, and geographies compose this innovative tour-de-force, and beneath this account of a fragile world is the fear of its loss, the overlapping shadows of war and change. Bernardi’s prose throbs with color, sensuality, and intelligence.”
—Karen Brennan, author of Television, a memoir

“Adria Bernardi’s Benefit Street is a marvel to read. It is a book about people and the social networks they weave. It is a book about cities and how cities anchor those networks. Finally, it is about the tapestry of relationships that cities, large and small, foster, regardless of ethnic and religious background. Reminiscent of Italo Calvino but moving to its own rhythms and creating its own poetry, Benefit Street is a novel that sings like no other.”
—Pablo Medina, author of The Cuban Comedy: A Novel

“What does it mean to lose a language, a culture, hard-won freedoms, a community? In this mysterious, allusive, and wonderfully economical novel, Bernardi’s characters weave a moving tapestry of friendship, courage, and deep feeling.”
—Andrea Barrett, author of Archangel and The Air We Breathe
— -

TABLE OF CONTENTS
First Lines
—There was not a straight street in my city
—We came in shaking the fronts of our coats
—Kader forked off into two major streets
—When I stepped up onto the high stone step
—Did you go visit?
—After dinner, Gabriel sat on the largest square cushion
—In the first days, how awkward
—Out through the front glass door
—The lesson from yesterday was still up on the board
—This time I was the one who was late
—Now where were we?
—Come, she called to Emiz
—Emiz had seen the original
—Now where were we?
—My brothers knew how to tell a good story
—There was once a man who travelled from village to village
—Now where were we?
—The wall to the left is higher
—Emiz crowds her when she walks
—No one comes to the door
—They kept writing her letters
—On Serafettin street
—The number is 20022202
—The conversations were never completed
—Once a group of friends
—You yourself have been lost
—She was born in a city
—There was a war to the east
—All these things around me
—She took off her shoes to assemble the loom
—She kept finding coins in her pocket
—Our kilims hung on the walls
—Aminah came in with packages
—In my country, everyone is a poet
—I miss the sh sounds
—Look at a map of my country
—Gabriel, we’re going to anchor this metal cable
—She wrapped flatbread in a cloth napkin
—What kills? a man shouted hoarsely
—By the time I was born
—Lazarus set out in a caravan
—We were dropped off in the wrong part of the city
—Once the pattern is begun, the loom cannot be moved
—Gabriel, my love, I said to him, come with me to the park
—None of us knows where Nazim went
—The missionary’s wife lived on a curved side street
—At the center of the city was a hill
—Stop me if I told you already
—At the center of the city
—I gathered and gathered
—Didymus stood by the window
—Even then, I would panic that I would not return home
—She is dead as a consequence
—And I put everything, but everything
—Didymus and I sat one afternoon in the middle of one of three park benches
—The houses there were closer to the street
—In my city, even the mechanics work on mosaics inside their workshops
—That evening, I pushed open the door