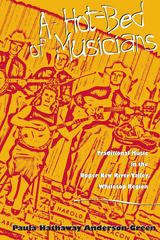 In the Blue Ridge Mountains along the Virginia–North Carolina border, an extraordinarily rich musical heritage survives and flourishes. Even before the legendary Bill Monroe coined the term “bluegrass” in the mid-1950s, the traditional music of this area was coming into its own as a distinctive style. Early performers from the 1920s through the 1950s, many of whom migrated northward during the Great Depression, popularized the music they had grown up hearing, thereby preserving and celebrating the cultural legacy of their home region.

In A Hot-Bed of Musicians, Paula Anderson-Green tells the stories of several of these legendary performers and instrument makers from the Upper New River Valley–Whitetop Mountain region, including Ola Belle Campbell Reed, Albert Hash, and Dave Sturgill. These men and women began to bring the music of Appalachia to a wider audience well before Nashville became the center of country music. Making extensive use of interviews, the book reveals the fascinating experiences and enduring values behind the practice of old-time music. This musical heritage remains an indispensable component of Appalachian culture, and Anderson-Green traces the traditions down to the present generation of musicians there.

Written for anyone with an interest in mountain music, this book focuses on performers from Alleghany and Ashe Counties in North Carolina and Carroll County and Grayson County in Virginia. It includes a comprehensive appendix of place names and music venues as well as annotated lists of musicians and the songs they have performed.