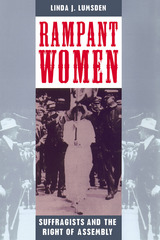 Dr. Linda J. Lumsden analyzes the First Amendment components of the women's suffrage movement, in particular their right to assembly as they organized pageants, parades, open air meetings and public demonstrations. The book opens with a woman-centered essay on the freedom of expression before the 20th century. The first chapter describes the heroism it took for women in the 19th century to gather in mass meetings, delegations and conventions. Chapter 2 explores Open-Air campaigns; Chapter 3 on petitioning as a political tool. Chapter 4 is on parades, starting with the first suffrage parades in 1908 (New York City; Boone, Iowa; and Oakland, California) and ending with the last one in 1917. Pageants are featured in chapter 5, and the chapter 6 is on picketing. The concluding chapter develops her position that suffrage assemblies provided the leverage for later protestors who sought a public arena to decry their political dissent. Four appendices then follow: a list of suffrage organizations; prominent suffragists in the 1910s; a chronology of major events in the U.S. suffrage movement; and, finally a list of when and where women won the vote. There is a brief mention of the 1913 suffrage paraders in Louisville, but generally the book focuses on states other than Kentucky.
AUTHOR BIOGRAPHY
Until her retirement, Linda J. Lumsden was a professor of journalism at the University of Arizona. Among other books, she was the author of Black, White, and Red All Over: A Cultural History of the Radical Press in Its Heyday, 1900–1917.
REQUEST ACCESSIBLE FILE