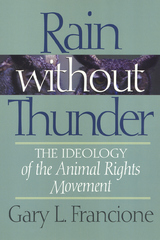 Are "animal welfare" supporters indistinguishable from the animal exploiters they oppose? Do reformist measures reaffirm the underlying principles that make animal exploitation possible in the first place? In this provocative book, Gary L. Francione argues that the modern animal rights movement has become indistinguishable from a century-old concern with the welfare of animals that in no way prevents them from being exploited.

Francione maintains that advocating humane treatment of animals retains a sense of them as instrumental to human ends. When they are considered dispensable property, he says, they are left fundamentally without "rights." Until the seventies, Francione claims, this was the paradigm within which the Animal Rights Movement operated, as demonstrated by laws such as the Federal Humane Slaughter Act of 1958.

In this wide-ranging book, Francione takes the reader through the philosophical and intellectual debates surrounding animal welfare to make clear the difference between animal rights and animal welfare. Through case studies such as campaigns against animal shelters, animal laboratories, and the wearing of fur, Francione demonstrates the selectiveness and confusion inherent in reformist programs that target fur, for example, but leave wool and leather alone.

The solution to this dilemma, Francione argues, is not in a liberal position that espouses the humane treatment of animals, but in a more radical acceptance of the fundamental inalienability of animal rights.

AUTHOR BIOGRAPHY
Gary L. Francione is Professor of Law and Nicholas de B. Katzenbach Scholar of Law at Rutgers University Law School, Newark. He is the co-director of the Rutgers Animal Rights Law Center and the author of Animals, Property, and the Law (Temple).
REVIEWS

"Francione cogently argues that the Animal Liberation Movement, though using rights rhetoric and espousing the eradication of animal exploitation, actually represents a new, self-defeating welfarism because its tactics embody the animal welfare position. Consequently, the plight of animals is worse than it was twenty years ago."
—Choice


"[A] must-read for those teaching animal ethics and for any laboratory animal specialist wanting to obtain a deeper understanding of the Animal Rights Movement."
—Lab Animal


"Gary Francione's work is both refined and exhaustively documented. [He] makes a strong case for viewing the animal rights position as both realistic and practical.... This is, in itself, a major contribution to the literature and one that will change the course of debate over animals."
—Michael Fox, Professor of Philosophy, Australian National University, Faculty of Arts