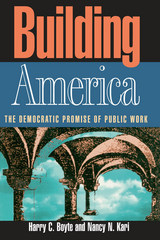 "...a marvelous piece of work. This is a book much needed, and deeply appreciated by those of us sometimes so mired in our corners of the world that we forget how many others there are out there with us."

--Deborah Meier, author of The Power of Their Ideas and director of Central Park East Schools

Throughout history, work has always been the taproot of American democracy, enabling diverse people to forge connections with each other and to address the nation's problems. Through work, people gain greater visibility, authority, and a larger intellectual horizon. They come to see themselves as creators of their communities, stakeholders in the country, and guardians of the commonwealth.

From low income communities to colleges, high-tech newspapers to government agencies and schools, Harry C. Boyte and Nancy N. Kari look to the revival of public-spirited work as a key to the rebirth of democracy in our time. Their exploration of the larger meanings of work leads to provocatively different approaches to change. These include many examples of citizen-government partnership in solving problems. By working on school reform and economic development in Baltimore, the mainly black group BUILD created a public space for overcoming searing racial divisions. Boyte and Kari explore new initiatives like the public journalism movement aimed at strengthening journalists' responsibilities to improve democracy. They offer lessons for turning jobs into public work in our changing economy. Building America concludes with a call for national action to renew the idea of "government by the people" through public work.

"Harry Boyte and Nancy Kari make an invaluable contribution by reminding us that democracy is about action, solving problems, and all that is implied in 'public work.'"

"Harry Boyte and Nancy Kari have captured the words and music of Americans doing the serious work of democracy. They show us the path to restoring vitality to the American experience."