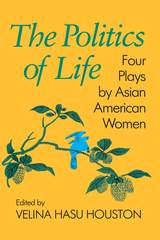 This anthology of work by three Asian American women playwrights—Wakako Yamauchi, Genny Lim, and Velina Hasu Houston—features pioneering contemporary writers who have made their mark in regional and ethnic theatres throughout the United States. In her introduction, Houston observes that the Asian American woman playwright is compelled "to mine her soul" and express the angst, fear, and rage that oppression has wrought while maintaining her relationship with America as a good citizen.

The plays are rich with cultural and political substance and have a feminist concern about women's spirit, intellect, and lives. They portray Asian and Asian American women who challenge the cultural and sexual stereotypes of the Asian female. Yamauchi's two plays deal with how easily a country can dishonor its citizens. In "12-1-A," a Japanese American family is incarcerated during World War II in an Arizona camp where Yamauchi herself was interned. "The Chairman's Wife" dramatizes the life of Madame Mao Tse Tung through the lens of events at Tien An Men Square in 1989. Lim's "Bitter Cane" is about the exploitation of Chinese laborers who were recruited to work the Hawaiian sugar cane plantations. In "Asa Ga Kimashita" ("Morning Has Broken"), Houston explores a Japanese woman's interracial romance in postwar Japan and the influence of traditional patriarchy on the lives of Japanese women.

These plays will entertain and enlighten, enrage and profoundly move audiences. With honesty, imagination and courage, each grapples with the politics of life.

AUTHOR BIOGRAPHY
Velina Hasu Houston teaches in the University of Southern California's School of Theatre and is the author of "Tea," one of the most produced plays about the experience of Asians in America.
TABLE OF CONTENTS