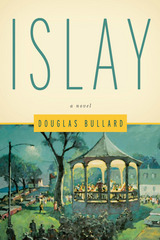 Now, a new edition of the classic novel Islay promises to entertain a contemporary audience with its Deaf American dream first conceived by Douglas Bullard in 1986. Islay is the name of an imaginary island state coveted by Lyson Sulla, a Deaf man who is tired of feeling that “hearing think deaf means dumb, pat head.” Sulla signs this to his wife Mary in explanation of his desire to tum Islay into a state solely for Deaf people, with himself as governor. From there, his peripatetic quest begins.

Sulla initiates his plan by driving to Islay to survey the lay of the land. There, he meets Gene Owls, another Deaf man who also has designs on the island. Sulla then embarks on travels around the nation recruiting Deaf people to join his crusade. Along the way, he meets a Deaf doctor, a bowling alley owner, a family of peddlers, a Deaf minister, and a willing businessman. Far from a heroic character, Sulla engages in each encounter in an earthy, self-sewing fashion that sends up all parties involved, hearing and Deaf.

Islay uniquely blends classic English forms of satire with the direct, down-to-earth expression of American Sign Language ingenuously rendered throughout. Deaf himself, Bullard has created a wonderfully amusing story that features Deaf people seeking their American dream in a manner both serious and joyous at the same time.

Douglas Bullard (1937-2005) was a graduate of Gallaudet College, an Alaskan geologist, an American Sign Language storyteller, and one-time president of the Florida Association of the Deaf.