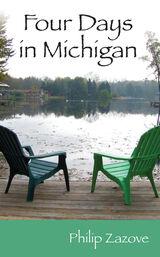 As a young, deaf Jewish woman living in a small town in Michigan in 1942, Sandra Horowitz felt deeply frustrated by her limited prospects. Even though she had just graduated from junior college, she knew that she had two strikes against her in fulfilling her dream to become a veterinarian. Better to marry Jacob Winter, her parents urged her, a deaf Jewish man who made a good living. Then, Sandra met Rudy Townsend, a hearing soldier on leave before shipping out to the war in Europe.

In just four days, both Sandra and Rudy’s worlds were turned upside down. Sandra’s parents feared him for being hearing and a Gentile, while Rudy’s parents expressed openly their bias against her ethnic background and her deafness. Even so, Sandra and Rudy soon realized that they had fallen in love, deeply and passionately. As they shared the brief time they had together, they learned about each other’s dreams for the future — Sandra’s desire to be a vet and Rudy’s determination to serve in Congress. Then, Rudy had to leave for the war.

Philip Zazove’s novel Four Days in Michigan captures perfectly the power of irrepressible love between two individuals from opposite backgrounds. The struggles they encounter in an era when such differences were never more sharply drawn also reveal great detail about deaf and hearing life. Despite all, their triumph comes ultimately because of their long-lasting individual respect and love.

Philip Zazove, M.D., is on the faculty of the Family Practice Department of the University of Michigan Medical School in Ann Arbor, MI, and the author of When the Phone Rings, My Bed Shakes: The Memoirs of a Deaf Doctor.