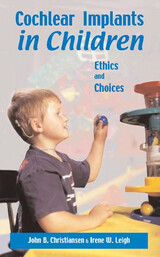 Cochlear Implants in Children: Ethics and Choices addresses every facet of the ongoing controversy about implanting cochlear hearing devices in children as young as 12 months old and in some cases, younger. Authors John B. Christiansen and Irene W. Leigh and contributors Jay Lucker and Patricia Elizabeth Spencer analyzed the sensitive issues connected with the procedure by reviewing 439 responses to a survey of parents with children who have cochlear implants. They followed up with interviews of the parents of children who have had a year's experience using their implants, and also the children themselves. Their findings shape the core of this useful and telling study.

Cochlear Implants begins with a history of their development and an explanation of how implants convert sound into electric impulses that stimulate the brain. The second section focuses on pediatric implants, starting with the ways parents coped with the discovery that their child was deaf. Parents share how they learned about cochlear implants and how they chose an implant center. They also detail their children's experiences with the implants after surgery, and their progress with language acquisition and in school.

The final part treats the controversy associated with cochlear implants, particularly the reaction of the Deaf community and the ethics of implanting young children without their consent. Cochlear Implants concludes with sage observations and recommendations for parents and professionals that complete it as the essential book on the pros and cons of this burgeoning technology.

John B. Christiansen is Professor of Sociology at Gallaudet University.

John B. Christiansen is Professor Emeritus of Sociology at Gallaudet University.