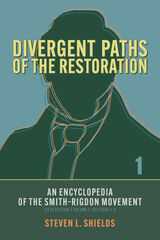 BUY
Divergent Paths of the Restoration: An Encyclopedia of the Smith–Rigdon Movement, Volume 1: Sections 1–4
by Steven L. Shields
Signature Books, 2022
Paper: 978-1-56085-455-5
When Joseph Smith founded the Church of Christ in 1830, he declared it to be God’s restoration of true Christianity, the Kingdom of God on earth. Although he foresaw opposition to such bold claims, he could not fathom that time and unforeseen circumstances would help to spawn hundreds of off-shoots and competing denominations—all claiming their origins in a movement born and sustained originally by Smith and Sidney Rigdon. Many of these groups have endured and boast multiple congregations of believers in many countries; others came and went quickly and have long since been forgotten. Some have survived but have only appealed to a handful of believers. Steven L Shields has for decades chronicled the various origins and paths of all known Restoration movements. This fifth edition of his encyclopedic study, offered as an ebook, includes recent groups born as internet communities. That so many groups and individuals have been unsatisfied with the more mainstream Mormon churches, yet cling to tenets of the Smith–Rigdon movement, speaks to the strengths of the restoration concept and the naïve view that one denomination can successfully meet all the needs of believers.
AUTHOR BIOGRAPHY
Steven L. Shields is a member of Community of Christ, has worked full time for the church in Asia, and was a missionary, pastor, and founding president of the church’s East Asia Mission Center. Now retired, he is currently president of the Royal Asiatic Society’s Korea branch.