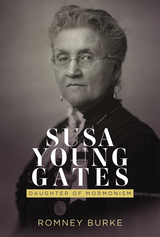 Brigham Young had over 50 wives and 56 children, but none has better name recognition than daughter Susa Young Gates (1856–1933). Yet she, like so many women of Mormonism's past, has remained a mystery to most church members. In Susa Young Gates, Romney Burke paints a portrait of a strong woman who rose to prominence within the church, fought for the rights of women throughout the country, yet dealt with personal trials and her share of heartbreak.

The divorce of Susa from her first husband was so traumatic that she never again mentioned that union or his name in public. Eight of her 13 children died before adulthood. She was unable to reconcile her older sister's departure from the LDS Church and conversion to Catholicism. Yet, despite her trials, Susa found fulfillment in her faith through service, as a prolific writer—co-authoring with her daughter Leah Dunford Widtsoe the 1930 biography of her father, Life Story of Brigham Young, founding the Young Woman's Journal in 1889, the Relief Society Magazine in 1915, and in her associations with such prominent women's advocates as Susan B. Anthony.
AUTHOR BIOGRAPHY
Romney Burke is a retired surgeon. He holds degrees from Stanford University and Yale University School of Medicine. Since retirement he has taught English at Ocean University of China in Qingdao under the auspices of Brigham Young University for two years, and served in Brazil as a medical advisor for LDS missionaries there. He and his wife, Mary Sue, a great-granddaughter of Susa Young Gates, recently completed a mission to Hong Kong.