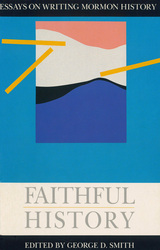 “History, myth, and legend are not always distinguishable,” cautions Smith,” “but there are some things we can know. The authors of these essays attempt to define the boundaries between objectivity and the biases of belief and unbelief which may color what is written about the past.”

Over the past decade Mormons have debated how their history should be written. New Mormon Historians believe that balanced, unprejudiced approaches produce the most reliable history. Traditionalists contend that no historian can be completely objective, that Mormon history should therefore be written with the “pre-understanding” that Joseph Smith restored the ancient Christian church.

AUTHOR BIOGRAPHY
About the editor: George D. Smith, a graduate of Stanford University with an M.B.A. from New York University, is president of Signature Books. He sits on the national advisory boards of Dialogue: A Journal of Mormon Thought and Sunstone magazine, and has published in each of these periodicals as well as in Free Inquiry and the John Whitmer Historical Association Journal. He is compiler and editor of An Intimate Chronicle: The Journals of William Clayton.
TABLE OF CONTENTS