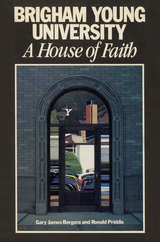 The purpose of Brigham Young University: A House of Faith is to outline the struggle the Mormon church has encountered in trying to blend academics and faith and in reconciling church standards with norms at other American universites, not to produce a comprehensive, chronological history of BYU. Instead, a selective approach has been taken–a thematic introduction to events, incidents, and statements, both published and private, in selected areas where tensions between scholarship and faith, freedom and regimentation have been the most pronounced. Examples include the development of a religious curriculum, the honor code, the controversy surrounding organic evolution, politics, student life, athletics, the arts, and faculty research. We hope that this approach will help readers appreciate the religious and intellectual dilemma facing educators and church leaders, as well as the fundamental sincerity of those involved in trying to establish academic rigor within religious parameters or to prevent moral deterioration when traditional restraints are left unchecked. Whatever the particular issue under discussion, an attempt has been made to keep the presentation balanced and impartial, yet sympathetic. While some readers may question the descriptive, largely noninterpretive approach, it is hoped that most will, through this approach, at least gain a greater understanding of the complex challenges involved in successfully integrating religion and academics.

We especially hope that Brigham Young University: A House of Faith will be of use to those who appreciate more than a cursory history of Mormonism–in this case, the Mormon concept of education–and who relish the rich fabric of pluralism. Brigham Young University has an engaging past, which, we believe, deserves more than a superficial treatment. Perhaps this book can be a springboard for more thorough investigations into other areas of the school’s past. There have been so many noteworthy accomplishments, discouraging defeats, moving religious experiences, humorous accounts of human foibles, and undocumented daily routine, that much remains in describing all that has gone into making the university founded more than a century ago by Brigham Young.

In presenting the sources cited in this work, we have followed the recommendations of the 1982 edition of The Chicago Manual of Style, with slight modifications. Readers will notice, for example, our incorporation of Chicago’s “down style” approach to capitalization. In order to facilitate future research, complete source citations are included as endnotes. To avoid a cumbersome and ultimately unworkable linking of each sentence with its corresponding source and bibliographic reference, we have instead referenced each paragraph and [p. xiii]cited sources in the endnotes section in the order in which material is presented in the paragraph indicated. Where the reader would otherwise encounter difficulty in identifying the specific source of a given piece of information, or where the source is considered especially important, it is provided in the text in an abbreviated form within parentheses.