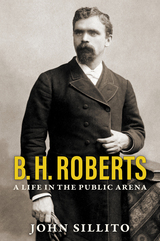 Without question, Mormonism’s most influential scholar during the first half of the twentieth century was B. H. Roberts (1857–1933), historian, theologian, public intellectual, and member of the First Council of Seventy of the Church of Jesus Christ of Latter-day Saints. Outside of his official church duties and his passion for research and writing, Roberts was an active figure in partisan politics, having run for Congress twice, elected once, but due to opposition from both political parties over polygamy, was never seated. This biography by prize-winning historian John Sillito, the fullest and most scholarly assessment to date of the controversial church leader, examines Roberts’s entire life, with particular attention to the public figure who remains influential, even today. Born in England to LDS convert parents, Roberts served as a missionary and several years after his call as a general authority, at age sixty, began serving as a chaplain during World War I. From 1922–27 he presided over the church’s Eastern States Mission. Although a hero to many even today for his scholarly output—a feat still rare among those called to church leadership—modern assessments recognize antiquated views on race and women’s suffrage. Yet Roberts remains a deeply compelling figure worthy of study.
AUTHOR BIOGRAPHY
John Sillito is professor emeritus for libraries at Weber State University (Ogden, UT). He earned a BA in history and an MA in political science from the University of Utah. He is editor of History’s Apprentice: The Diaries of B. H. Roberts and co-editor of A World We Thought We Knew: Readings in Utah History, Letters from Exile: The Correspondence of Martha Hughes Cannon, and Mormon Mavericks: Essays on Dissenters.