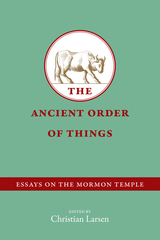 Temple worship has long distinguished the Church of Jesus Christ of Latter-day Saints from mainstream Christendom. Even the denominations that trace their roots to LDS Church founder Joseph Smith have largely defined temple doctrines and ordinances as relics of the past; others have adopted and restored them to what they deem to be their purest form. To understand the LDS people is to grasp the impact the temple has had on church members as they embraced both temple-related teachings as essential to exaltation as well as the brick-and-mortar structures that stand as symbols of faith and sacrifice.

Christian Larsen has assembled a collection of essays that illuminate the role of the temple and its rocky relationship with controversial subjects such as race and marriage. Some temples were built, abandoned, and given new life; others were either constructed for temporary use or never built at all. The nature of LDS temple ordinances is such that what LDS members deem sacred, others dismiss as secret.
AUTHOR BIOGRAPHY
Christian Larsen holds a master’s degree in publishing from George Washington University and two bachelor’s degrees in history and Latin American Studies from the University of Utah. An amateur student of Mormon/LDS history, he works professionally in digital publishing strategy and content marketing. He and his husband live in Salt Lake City, Utah.