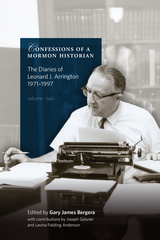 Leonard Arrington (1917–99) was born an Idaho chicken rancher whose early interests seemed not to extend much beyond the American west. Throughout his life, he tended to project a folksy persona, although nothing was farther from the truth.

He was, in fact, an intellectually oriented, academically driven young man, determined to explore the historical, economic, cultural, and religious issues of his time. After distinguishing himself at the University of North Carolina (Chapel Hill) and serving in the army during World War II in North Africa and Italy, Arrington accepted a professorship at Utah State University. In 1972 he was called as the LDS Church Historian—an office he held for ten years until, following a stormy tenure full of controversy over whether the “New Mormon History” he championed was appropriate for the church, he was quietly released and transferred, along with the entire Church History Division, to Brigham Young University. It was hoped that this would remove the impression in people’s minds that his writings were church-approved.

His personal diaries reveal a man who was firmly committed to his church, as well as to rigorous historical scholarship. His eye for detail made him an important observer of “church headquarters culture.”

AUTHOR BIOGRAPHY
Gary James Bergera is managing director of the Smith-Pettit Foundation in Salt Lake City. He is the editor of two other compilations of personal writings by historical figures: The Autobiography of B. H. Roberts and On Desert Trails with Everett Ruess. He was also the general editor of Signature’s Significant Mormon Diaries series. He is the author of Conflict in the Quorum: Orson Pratt, Brigham Young, Joseph Smith and has received awards from the Dialogue Foundation, Mormon History Association, and Utah Historical Society. Currently he is on the editorial boards of the Journal of Mormon History and John Whitmer Historical Journal.