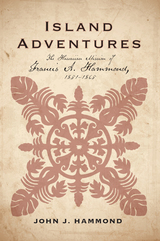 Francis (“Frank”) Hammond was not an average Mormon pioneer. After breaking his back working on a whaling ship off the coast of Siberia in 1844, he was set ashore on the island of Maui to heal. While there he set up shop as a shoemaker and learned the local language. Three years later, he converted to Mormonism in San Franciso, and in 1851 he was sent back to Hawaii as a missionary along with his new wife, Mary Jane. In the 1860s he returned to the islands as mission president.

Through all this, he and his wife kept extensive and fascinating journals, documenting their adventures on land and sea, as well as relations (some prickly) with fellow missionaries and non-Mormon caucasians and Hawaiians. Hammond established a Mormon gathering place on the island of Lana’i, and in the 1860s he traveled by stagecoach from Utah to the west coast with a satchel of $5,000 in gold coins to purchase the land that became the site in O’ahu of the LDS temple, church college, and Polynesian Culture Center.

AUTHOR BIOGRAPHY
John J. Hammond was born and raised near Blackfoot, Idaho. After earning a Ph.D. from the State University of New York at Buffalo, he taught political science and philosophy at Kent State University for thirty-five years, retiring in 2007. For the past fourteen years, he has enjoyed researching Mormon topics—including the life and writings of his great-great-grandfather, Frank Hammond.