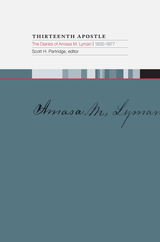 Originally from New Hampshire, Amasa Mason Lyman converted to Mormonism over the objection of his family at age nineteen. Compelled to leave home with a total of eleven dollars in his pocket, he ventured some 700 miles east to Ohio, where Joseph Smith told him to return east and serve a mission despite his unfamiliarity with the church’s doctrines and procedures.

Ten years later Lyman temporarily replaced Orson Pratt in the Quorum of Twelve Apostles. This made him a kind of fifth wheel (thirteenth apostle) when Pratt was reinstated. Lyman would nevertheless regain his position in the quorum two years later and serve faithfully until his expulsion in 1867 for denying the divinity of Jesus. He then gravitated toward the anti-Brighamite spiritualist movement in Utah. Tracing the arc of this transformation from firm believer to prominent heretic, Lyman’s diaries are a window into the thinking of pioneer Mormons and the idealogical issues that sometimes divided them. This is the first in an anticipated multi-volume collection of historic diaries that will comprise the Signature Legacy Series.

AUTHOR BIOGRAPHY
Scott H. Partridge is a Professor Emeritus in Business Administration at California State University, Hayward, where he taught for thirty-two years after receiving and MBA from the University of Oregon and a Ph.D. in history from Harvard. He is the editor of the Eliza Maria Partridge Journal; he has also published in BYU Studies and elsewhere.