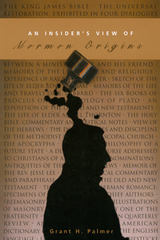 Over the past thirty years, an enormous amount of research has been conducted into Mormon origins—Joseph Smith’s early life, the Book of Mormon, the prophet’s visions, and the restoration of priesthood authority. Longtime LDS educator Grant H. Palmer suggests that most Latter-day Saints remain unaware of the significance of these discoveries, and he gives a brief survey for anyone who has ever wanted to know more about these issues.

He finds that much of what we take for granted as literal history has been tailored over the years—slightly modified, added to, one aspect emphasized over another—to the point that the original narratives have been nearly lost. What was experienced as a spiritual or metaphysical event, something from a different dimension, often has been refashioned as if it were a physical, objective occurrence. This is not how the first Saints interpreted these events. Historians who have looked closer at the foundational stories and source documents have restored elements, including a nineteenth-century world view, that have been misunderstood, if not forgotten.
AUTHOR BIOGRAPHY
Grant H. Palmer (M.A., American history, Brigham Young University) is a three-time director of LDS Institutes of Religion in California and Utah, a former instructor at the Church College of New Zealand, and an LDS seminary teacher at two Utah locations. He has been active in the Mormon History Association and on the board of directors of the Salt Lake Legal Defenders Association. He is the author of An Insider’s View of Mormon Origins and The Incomparable Jesus. Now retired, his hobby is pigeon fancying. He has four children and eight grandchildren. He and his wife live in Sandy, Utah.