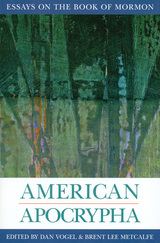 A fine line divides scripture from non-scripture, writes Robert M. Price in American Apocrypha. There are books that are not in the Bible that are as powerful and authoritative as anything in the canon. At the same time, much of the Bible was written centures after the events it narrates by scribes using fictitious names. Clearly, the hallmark of scripture is not historical accuracy but rather its spiritual impact on individuals; exclusion from the canon is not reason to dismiss a book as heretical.

Consider the Book of Mormon, first published in 1830. The nature of this volume—in particular its claim to antiquity—is the theme of nine ground-breaking essays in American Apocrypha. Thomas W. Murphy discusses the Book of Mormon’s view that American Indians are descendants of ancient Hebrews. In recent DNA tests, Native Americans have proven to be of Siberian ancestry and not of ancient Jewish or Middle Eastern descent. Nor is the Book of Mormon a traditional translation from an ancient document, writes David P. Wright, as indicated by the underlying Hebrew in the book’s Isaiah passages. Other contributors to American Apocrypha explore the evolution of ideas in the Book of Mormon during the course of its dictation.

Editors Dan Vogel and Brent Metcalfe have chosen essays by authors who represent a wide range of disciplines and perspectives: Robert Price edits the Journal of Higher Criticism; Thomas Murphy chairs the anthropology department at Edmonds Community College; David Wright teaches Hebrew Bible at Brandeis University. They are joined by Scott C. Dunn; Edwin Firmage, Jr.; George D. Smith; and Susan Staker—all of whom explore what can be reasonably asserted about the Book of Mormon as scripture.

AUTHOR BIOGRAPHY
Dan Vogel is the editor of Early Mormon Documents, a five-volume series that won Best Documentary awards from both the Mormon History Association and the John Whitmer Historical Association. He is the editor of The Word of God: Essays on Mormon Scripture; author of Indian Origins and the Book of Mormon; Joseph Smith: The Making of a Prophet and Religious Seekers and the Advent of Mormonism; and co-editor of American Apocrypha: Essays on the Book of Mormon. He is also a contributor to The Prophet Puzzle: Interpretive Essays on Joseph Smith and Differing Visions: Dissenters in Mormon History, among others. He has presented research papers at the annual Mormon History Association meetings, Sunstone Theological Symposium, and similar conferences. He is currently preparing a definitive edition of Joseph Smith’s multi-volume History of the Church. He and his wife live in Westerville, Ohio.