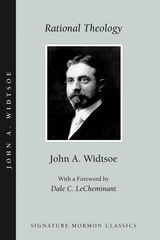 The decades framing the turn of the twentieth century constituted a period of progressive optimism, of increasing faith in science and technology, and of character-building education—vividly illustrated in the founding of Christian Science, for example, and in the Latter-day Saint magazine, the Improvement Era.

In keeping with the times, it is not surprising that former professor of chemistry and university president John A. Widtsoe was called to the LDS Quorum of Twelve Apostles in 1921. An inheritor and promoter of “reasonable” religion, his popular book, Joseph Smith as Scientist, and his influential LDS Melchizedek priesthood manual (later released as a book), Rational Theology, underscored his and other Mormon leaders’ positivist assumptions about the world—that science was good, that Mormonism would be proven true, and, drawing from Herbert Spencer’s application of evolution to ethics, that society would be perfected.

Like Widtsoe’s secular books (published nationally and internationally by Macmillan, Webb, and J. Wiley & Sons), Rational Theology would enjoy multiple printings domestically and several foreign translations. Although his other church writings (Evidences and Reconciliations, The Gospel in the Service of Man, Guide Posts to Happiness: The Right to Personal Satisfaction, and others) proved to be influential, none so thoroughly summarized his embrace of science and Mormonism as Rational Theology.

John Andreas Widtsoe was born in Dalöe, Island of Fröyen, Norway, in 1872. He immigrated to Utah in 1883 and graduated from Brigham Young College in 1891 and from Harvard with high honors in 1894. Widtsoe married Leah Eudora Dunford, daughter of Susa Young Gates, in 1898 and had seven children. In 1899 he was awarded a Ph.D. with high honors from the University of Göttingen, Germany. He both taught at and served as president of Utah State Agricultural College and the University of Utah. He was elected to the Victoria Institute in England, an honor received by only one other Mormon scholar—James E. Talmage. Widtsoe served as editor of the Improvement Era and wrote more than thirty books, including religious, autobiographical, and professional publications. His essay on LDS temple worship has been included in the new edition of The House of the Lord: A Study of Holy Sanctuaries Ancient and Modern. He was an apostle from 1921 until his death in 1952.

AUTHOR BIOGRAPHY
Dale C. LeCheminant is a former LDS Institute of Religion instructor in southern California and Salt Lake City, where he retired. He has published in the Journal of Mormon History and elsewhere and contributed to such works as John A. Widtsoe’s recently re-issued Rational Theology: As Taught by the Church of Jesus Christ of Latter-day Saints.