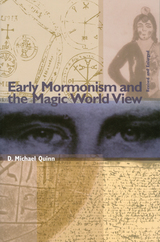 In this ground-breaking book, D. Michael Quinn masterfully reconstructs an earlier age, finding ample evidence for folk magic in nineteenth-century New England, as he does in Mormon founder Joseph Smith’s upbringing. Quinn discovers that Smith’s world was inhabited by supernatural creatures whose existence could be both symbolic and real. He explains that the Smith family’s treasure digging was not unusual for the times and is vital to understanding how early Mormons interpreted developments in their history in ways that differ from modern perceptions. Quinn’s impressive research provides a much-needed background for the environment that produced Mormonism.

This thoroughly researched examination into occult traditions surrounding Smith, his family, and other founding Mormons cannot be understated. Among the practices no longer a part of Mormonism are the use of divining rods for revelation, astrology to determine the best times to conceive children and plant crops, the study of skull contours to understand personality traits, magic formula utilized to discover lost property, and the wearing of protective talismans. Ninety-four photographs and illustrations accompany the text.
AUTHOR BIOGRAPHY
D. Michael Quinn (Ph.D., history, Yale University) is an Affiliated Scholar at the University of Southern California’s Center for Feminist Research. He has been a full-time researcher and writer, a professor of history at Brigham Young University, and a visiting professor of history (2002-03) at Yale. His accolades include Best Book awards from the American Historical Association and the Mormon History Association.

His major works include Early Mormonism and the Magic World View, Elder Statesman: A Biography of J. Reuben Clark, the two-volume Mormon Hierarchy series (Origins of Power, Extensions of Power), and Same-Sex Dynamics among Nineteenth-Century Americans: A Mormon Example. He is the editor of The New Mormon History: Revisionist Essays on the Past and a contributor to American National Biography;Encyclopedia of New York State; Fundamentalisms and Society: Reclaiming the Sciences, the Family, and Education; the New Encyclopedia of the American West; Under an Open Sky: Rethinking America’s Western Past; and others.

He has also received honors—fellowships and grants—from the American Academy of Arts and Sciences, the American Council of Learned Societies, the Henry E. Huntington Library, Indiana-Purdue University, and the National Endowment for the Humanities. In addition, he has been a keynote speaker at the Center for the Study of Religion and American Culture, the Chicago Humanities Symposium, Claremont Graduate University, University of Paris (France), Washington State Historical Society, and elsewhere, and a consultant for television documentaries carried by the Arts and Entertainment Channel, the Canadian Broadcasting Corporation, the History Channel, and the Public Broadcasting Service (PBS).