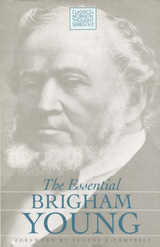 After converting to Mormonism in 1832, Brigham Young (1801-77) quickly rose to prominence and was called to the Quorum of Twelve Apostles within three years. He personally directed the highly successful 1839 proselyting mission to Great Britain, and he was appointed president of the Twelve Apostles the following year. In 1846-47 he oversaw the epic colonization of the Intermountain West.

Self-educated and preoccupied with the day-to-day business of his widespread empire, Young rarely found time to read. But he delivered hundreds of lively, extemporaneous sermons which blended common sense with theological speculation. Such homespun treatises carried an immediacy that was absent from the philosophically-oriented studies of his ecclesiastical colleague Orson Pratt, though, at the same time, Young’s speeches could be unfocused and contradictory.

Several of the more controversial teachings that Young promulgated—Adam-as-God, divine omniscience, and blood atonement—have sparked considerable debate since they were first uttered more than one hundred years ago. “Will you love your brothers and sisters likewise,” he once asked, “when they have committed a sin that cannot be atoned for without the shedding of their blood? Will you love that man or woman well enough to shed their blood?”

Other favorite topics were the “personality of God,” “election and reprobation,” and “the resurrection.” His sermons usually begin in a chatty way: “I remarked last Sunday that I had not felt much like preaching,” or “When I contemplate the subject of salvation, and rise before a congregation to speak upon that all-important matter, it has been but a few times in my life that I could see a beginning point to it, or a stopping place.” Readers will find themselves drawn into the rhythm of Young’s rhetoric in the same way as his original hearers were.

AUTHOR BIOGRAPHY
Eugene E. Campbell was a professor of history at Brigham Young University until his death in 1986. He was the author of Establishing Zion: The Mormon Church in the American West, 1847-1869, co-author of three works—Fort Bridger: Island in the Wilderness, Fort Supply: Brigham Young’s Green River Experiment, and Hugh B. Brown: His Life and Thought—and the co-editor of Utah’s History, contributor to The New Mormon History: Revisionist Essays on the Past, as well as author of the foreword to The Essential Brigham Young. He was a founding member and early president of the Mormon History Association.