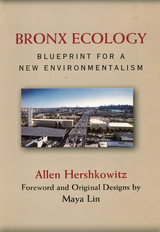 "The Bronx Community Paper Company teaches us that we have the power, if we muster the will, creativity, and cooperation, to recover lost pieces of America's environment, return them to good health, protect other lands and resources from being destroyed, and even create environmentally friendly jobs in the process." —President Bill Clinton

In 1991, frustrated by the failure of lawmakers to produce meaningful progress on environmental issues, Allen Hershkowitz, a scientist with the Natural Resources Defense Council (NRDC) opted for an innovative approach. Resolving to put market forces to work for the environment, Hershkowitz devised a plan to develop a world-scale recycled-paper mill on the site of an abandoned rail yard in the South Bronx.

Created in collaboration with colleagues at NRDC, the private sector, government, unions, and community groups, and with a building designed by renowned architect and designer Maya Lin, the Bronx Community Paper Company (BCPC) was intended to put the ideas of industrial ecology to work in a project that not only avoided exacerbating environmental problems but actually remediated them. One of the primary goals of the project was to show that environmental protection, job production, social assistance, economic development, and private-sector profitability can work together in a mutually supportive fashion.

In Bronx Ecology, Hershkowitz tells the story of the BCPC from its earliest inception to its final demise nearly ten years later. He describes the technical, economic, and competitive barriers that arose throughout the project as well as the decisive political and legal blows that doomed their efforts to secure financing, ultimately killing the project.

Interwoven with the BCPC tale is Hershkowitz's vision for a new, engaged environmentalism, complete with principles for a new era of industrial development that combines social and environmental responsibility with a firm commitment to profit-making. As Hershkowitz explains, while the project was never built, its groundbreaking collaboration can hardly be considered a failure. Rather the BCPC, in the words of veteran environmental journalis.

Philip Shabecoff, "can be seen as the beginning of a learning process for entrepreneurial environmentalism, a pathway to a new approach in the 21st century." Bronx Ecology offers a compelling vision of that exciting new pathway.

AUTHOR BIOGRAPHY
Maya Lin is renowned modernist artist and architect, best known for her work on the Vietnam Veterans' Memorial in Washington, DC.
TABLE OF CONTENTS