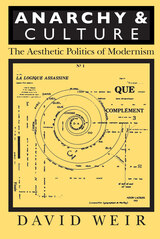 Anarchy and Culture: The Aesthetic Politics of Modernism
by David Weir
University of Massachusetts Press, 1997
Paper: 978-1-55849-084-0
Anarchism is generally understood as a failed ideology, a political philosophy that once may have had many followers but today attracts only cranks and eccentrics. This book argues that the decline of political anarchism is only half the story; the other half is a tale of widespread cultural success.

David Weir develops this thesis in several ways. He begins by considering the place of culture in the political thought of the classical anarchist thinkers William Godwin, Pierre-Joseph Proudhon, Mikhail Bakunin, and Peter Kropotkin. He then shows how the perceived "anarchy" of nineteenth-century society induced writers such as Matthew Arnold, Henry James, and Fyodor Dostoyevsky to turn away from politics and seek unity in the idea of a common culture.

Yet as other late-nineteenth-century writers and artists began to sympathize with anarchism, the prospect of a common culture became increasingly remote. In Weir's view, the affinity for anarchism that developed among members of the artistic avant-garde lies behind much of fin de siÃ¨cle culture. Indeed, the emergence of modernism itself can be understood as the aesthetic realization of anarchist politics. In support of this contention, Weir shows that anarchism is the key aesthetic principle informing the work of a broad range of modernist figures, from Henrik Ibsen and James Joyce to dadaist Hugo Ball and surrealist Luis BuÃ±uel.

Weir concludes by reevaluating the phenomenon of postmodernism as only the most recent case of the migration of politics into aesthetics, and by suggesting that anarchism is still very much with us as a cultural condition.
AUTHOR BIOGRAPHY
David Weir is associate professor of comparative literature and director of foreign language programs at The Cooper Union for the Advancement of Science and Art.
REVIEWS
"Weir's new book represents an original and imaginative re-thinking of the Arnoldian concepts of 'culture' and 'anarchy' from the perspective of the late twentieth century. It is a masterful study of the hidden roots of contemporary culture and should be read by anyone interested in how and why our intellectual landscape has changed quite dramatically since the Victorian era."—David Gross, author of The Past in Ruins:

Tradition and the Critique of Modernity