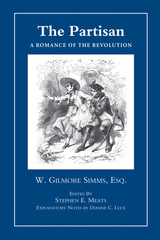 The writings of William Gilmore Simms (1806-1870) provide a sweeping fictional portrait of the colonial and antebellum South in all of its regional diversity. Simms's account of the region is more comprehensive than that of any other author of his time; he treats the major intellectual and social issues of the South and depicts the bonds and tensions among all of its inhabitants. By the mid-1840s Simms's novels were so well known that Edgar Allan Poe could call him "the best novelist which this country has, on the whole, produced." The thirteenth volume in the ongoing Arkansas Edition of the works of Simms, The Partisan is the first in order of publication of Simms's Revolutionary War romances. Although Simms took advantage of the novelist's prerogative to invent characters and events for his saga, he did so with a historian's eye, making extensive use of official histories; letters, diaries, and other documents; family traditions; and unpublished and published memoirs. Simms gives human interest to the novel's historical framework with two love triangles, mixing romantic conventions with gritty realism that outlines the four classes of Simms's ideal society. The Partisan is also remarkable among Simms's work for its use of symbols, indicating, perhaps, a new intention for the novel. The result is a satisfying work of literary art enlivened with adventure and humor while remaining true to the history behind it.
TABLE OF CONTENTS
CONTENTS
PREFACE TO THE ARKANSAS EDITION
WILLIAM GILMORE SIMMS CHRONOLOGY
ACKNOWLEDGMENTS
INTRODUCTION
Text of The Partisan
Explanatory Notes by Dianne C. Luce
Textual Notes and Emendations
SELECT BIBLIOGRAPHY
REQUEST ACCESSIBLE FILE