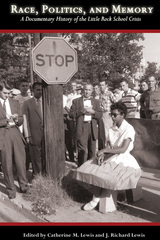 In 1957, President Dwight D. Eisenhower and Arkansas governor Orval Faubus viewed the desegregation of Little Rock Central High through very different lenses. The president worried that displays of rampant racism tarnished the nation's reputation as a global power and undermined efforts to thwart the spread of communism. The governor sided with his segregationist constituents to guarantee his political survival. For the nine teenagers caught in the middle, Central High was a cauldron of racial tension. These students represented the black and moderate-white community’s desire for social justice. The documents collected in this book–newspaper articles, political cartoons, excerpts from oral histories and memoirs, speeches, photographs, and editorials–help readers understand how this local, southern conflict became a national and international cause. The documents selected cover the period 1900–2006. Some have never been published before or are in out-of-print sources. Each reveals something significant about the event and its aftermath, while some offer an unconventional or unexpected perspective on the crisis and the issues it raised. A timeline, a list of key players in the crisis, and a selected, annotated bibliography are included.
AUTHOR BIOGRAPHY
Catherine M. Lewis is an associate professor of history and women’s studies at Kennesaw State University and special projects coordinator for the Atlanta History Center. She is the author of a number of books, most recently, Don't Ask What I Shot: How Eisenhower’s Love of Golf Helped Shape 1950s America.
REVIEWS
“A welcome and valuable addition to the existing literature on the school crisis, civil rights, race relations, and national and international politics.” —John A. Kirk, Royal Holloway, University of London