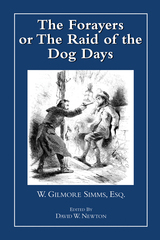 Historical novelist William Gilmore Simms first published The Forayers in 1855 at the peak of his reputation and ability. Simms had set out to create a prose epic through a series of linked novels detailing American history and struggles from early colonization to the mid-nineteenth century. The Forayers, which was the sixth book in his series of eight Revolutionary War novels set in the South, describes events around Orangeburg, South Carolina, before the Battle of Eutaw Springs (itself covered in this novel’s sequel, Eutaw). It features such characters as Hell-fire Dick, a hardhearted, foul-mouthed looter under Tory protection. Simms hoped his readers would find this book “a bold, brave, masculine story; frank, ardent, vigorous; faithful to humanity.” He described it to a friend as “fresh and original” and wrote that “the characterization [is] as truthful as forcible. It is at once a novel of society & a romance.”
AUTHOR BIOGRAPHY

David W. Newton is a noted Simms scholar and a professor of English at the State University of West Georgia.

John Caldwell Guilds is Distinguished Professor in Humanities at the University of Arkansas. He has published extensively on Simms and has served as the editor of many of his works.

REVIEWS
“It is cause for rejoicing that another volume—Forayers is the eighth—is now added to the University of Arkansas Press’s distinguished series. I cannot imagine a more important editorial and publishing project in the field of nineteenth-century literature. With good texts available for the first time in a century or more, it is possible for critics, scholars, students, and general readers to study, understand, and re-evaluate this most neglected and underrated of American writers.”
—James B. Meriwether, McClintock Emeritus Professor of Southern Letters, University of South Carolina


“. . . Full of striking adventures racily narrated. For conveying vivid pictures of the war in the south, during the Revolutionary struggles, the series of volumes to which this work belongs, may be said to be unmatched in our literature.”
—Graham’s, January 1856


“The best novelist which this country has, on the whole, produced.”
—Edgar Allan Poe, Broadway Journal, September 20, 1845