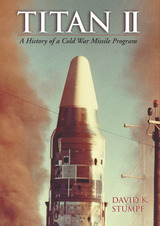 The Titan II ICBM (intercontinental ballistic missile) program was developed by the United States military to bolster the size, strength, and speed of the nation’s strategic weapons arsenal in the 1950s and 1960s. Each missile carried a single warhead—the largest in U.S. inventory—used liquid fuel propellants, and was stored and launched from hardened underground silos. The missiles were deployed at basing facilities in Arkansas, Arizona, and Kansas and remained in active service for over twenty years. Since military deactivation in the early 1980s, the Titan II has served as a reliable satellite launch vehicle.

This is the richly detailed story of the Titan II missile and the men and women who developed and operated the system. David K. Stumpf uses a wide range of sources, drawing upon interviews with and memoirs by engineers and airmen as well as recently declassified government documents and other public materials. Over 170 drawings and photographs, most of which have never been published, enhance the narrative. The three major accidents of the program are described in detail for the first time using authoritative sources.

Titan II will be welcomed by librarians for its prodigious reference detail, by technology history professionals and laymen, and by the many civilian and Air Force personnel who were involved in the program—a deterrent weapons system that proved to be successful in defending America from nuclear attack.
AUTHOR BIOGRAPHY
David K. Stumpf is associate research scientist at the University of Arizona and author of Regulus: The Forgotten Weapon.
REVIEWS
"The author breaks new ground on the history of the Titan II weapon system, both from the perspective of technological achievement and from the viewpoint of human drama. . . . [A] masterpiece of scholarly research."
—Rick W. Sturdevant Staff Historian, USAF


“By far the most detailed account of Titan II history, the book is based on extensive research in official Air Force histories, archival sources, conference papers, personal interviews and correspondence with participants in the program, and documents provided by participants. It is lavishly illustrated and provides highly useful reference source that should be acquired by every research library. … [A]nyone interested in the history of strategic weapons or rocketry should welcome [Stumpf’s] labor of love in producing this handsome and detailed study.”
—J.D. Hunley, The Journal of Military History, July 2001