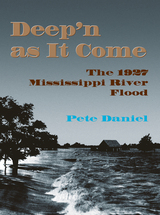 In the spring and summer of 1927, the Mississippi River and its tributaries flooded from Cairo, Illinois to New Orleans, Louisiana, and the Gulf of Mexico, tearing through seven states, sometimes spreading out to nearly one hundred miles across. Pete Daniel’s Deep’n as It Come, available again in a new format, chronicles the worst flood in the history of the South and re-creates, with extraordinary immediacy, the Mississippi River’s devastating assault on property and lives.

Daniel weaves his narrative with newspaper and firsthand accounts, interviews and survivors, official reports, and over 140 contemporary photographs. The story of the common refugee who suffered most of the effects of the flood emerges alongside the details of the massive rescue and relief operation—one of the largest ever mounted in the United States. The title, Deep’n as It Come, is a phrase from Cora Lee Campbell’s early description of he approaching water, which, Daniel writes, “moved at a pace of some fourteen miles per day,” and in its movement and sound, “had the eeriness of a full eclipse of t he sun, unsettling, chilling.”

“The contradictions of sorrow and humor. . . death and salvation, despair and hope, calm and panic—all reveal the human dimension” in this compassionate and unforgettable portrait of common people confronting a great natural disaster.
AUTHOR BIOGRAPHY
Pete Daniel is a retired curator at the Smithsonian’s National Museum of American History, and specializes in the history of the twentieth-century South. He has curated exhibits that deal with science, photography, and music, and he is author of Toxic Drift: Pesticides and Health in the Post-World War II South. His Lost Revolutions: The South in the 1950s won the OAH Elliott Rudwick Prize. He is also past president of the Southern Historical Association. He is the author of Curating the American Past: A Memoir of a Quarter Century at the Smithsonian National Museum of American History, forthcoming from the University of Arkansas Press.
REVIEWS
“Pete Daniel’s prose flows like the mighty river he describes. Through rich description, both in his own words and those of contemporaries, and through photographs, he re-creates the moods that rolled through the Mississippi Valley in 1927, as Old Man River thrust aside levees and swept across millions of square miles of land in its full fury, carrying all—man, beast, and structures—before it. … Deep’n as It Come is an outstanding blend of oral history, photo-documentation, and written sources. The traditional types of sources are utilized effectively, the work is fully documented, and the style and organization are clear. Numerous works, routine historical narratives, meet these criteria; this one goes beyond. Pete Daniel is to be congratulated, for his work not only informs—it also grips the reader and involves him in the human drama of man’s greatest struggle with the mighty powers of the Father of Waters.”
—James E. Fickle, The Alabama Review, April 1978


“Anyone who has lived near a major river will find Pete Daniel’s Deep’n as It Come to be a realistic narration of the eternal struggle between nature and technology. The work provides a dramatic presentation of the Mississippi River’s assault upon property and lives, vividly protrayed through the use of 148 pictures, innumerable firsthand accounts, and official reports. This author’s view of what may have been the worst flood in American history is that the disaster evoked both the good and bad in human response and also challenged some basic American premises. … This documentary of a great national disaster is ably written and carefully researched.”
—George W. Robinson, The Journal of American History