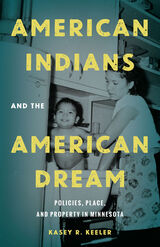 Nearly seven out of ten American Indians live in urban areas, yet studies of urban Indian experiences remain scant. Studies of suburban Natives are even more rare. Today’s suburban Natives, the fastest-growing American Indian demographic, highlight the tensions within federal policies working in tandem to move and house differing groups of people in very different residential locations. In American Indians and the American Dream, Kasey R. Keeler examines the long history of urbanization and suburbanization of Indian communities in Minnesota.

At the intersection of federal Indian policy and federal housing policy, American Indians and the American Dream analyzes the dispossession of Indian land, property rights, and patterns of home ownership through programs and policies that sought to move communities away from their traditional homelands to reservations and, later, to urban and suburban areas. Keeler begins this analysis with the Homestead Act of 1862, then shifts to the Indian Reorganization Act in the early twentieth century, the creation of Little Earth in Minneapolis, and Indian homeownership during the housing bubble of the early 2000s.

Kasey R. Keeler (Tuolumne Me-Wuk and Citizen Potawatomi) is assistant professor in the Department of Civil Society and Community Studies and in American Indian Studies at the University of Wisconsin, Madison.