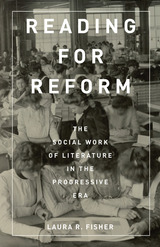 An unprecedented examination of class-bridging reform and U.S. literary history at the turn of the twentieth century

Reading for Reform rewrites the literary history of late nineteenth and early twentieth century America by putting social reform institutions at the center of literary and cultural analysis. Examining the vibrant, often fractious literary cultures that developed as part of the Progressive mandate to uplift the socially disadvantaged, it shows that in these years reformers saw literature as a way to combat the myriad social problems that plagued modern U.S. society. As they developed distinctly literary methods for Americanizing immigrants, uplifting and refining wage-earning women, and educating black students, their institutions gave rise to a new social purpose for literature.

Fisher reveals how reformist approaches to race, class, religion, and gender formation shaped American literature between the 1880s and the 1920s. In doing so, she tells a new story about the fate of literary practice, and the idea of literature’s practical value, during the very years that modernist authors were proclaiming art’s autonomy from concepts of social utility.

"Reading for Reform is an extraordinary exploration not only of the possibility but also the limits of empathy. Arguing that Progressive Era reform institutions took reading literature to be instrumental, not merely persuasive, Laura R. Fisher suggests that negative reactions to this task-oriented idea about reading paved the way for new modes of storytelling in subsequent decades."—Brad Evans, Rutgers University