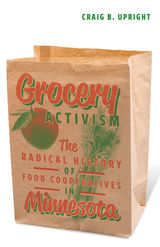 Our notions of food co-ops generally don’t include images of baseball bat–wielding activists in the aisles. But in May 1975, this was the scene as a Marxist group known as the Co-op Organization took over the People’s Warehouse, a distribution center for more than a dozen small cooperative grocery stores in the Minneapolis area. The activist group’s goal: to curtail the sale of organic food. The People’s Warehouse quickly became one of the principal fronts in the political and social battle that Craig Upright explores in Grocery Activism. The story of the fraught relationship of new-wave cooperative grocery stores to the organic food industry, this book is an instructive case study in the history of activists intervening in capitalist markets to promote social change.

Focusing on Minnesota, a state with both a long history of cooperative enterprise and the largest number of surviving independent cooperative stores, Grocery Activism looks back to the 1970s, when the mission of these organizations shifted from political activism to the promotion of natural and organic foods. Why, Upright asks, did two movements—promoting cooperative enterprise and sustainable agriculture—come together at this juncture? He analyzes the nexus of social movements and economic sociology, examining how new-wave cooperatives have pursued social change by imbuing products they sell with social values. Rather than trying to explain the success or failure of any individual cooperative, his work shows how members of this fraternity of organizations supported one another in their mutual quest to maintain fiscal solvency, promote better food-purchasing habits, support sustainable agricultural practices, and extol the virtues of cooperative organizing. A foundational chapter in the history of organic food, Grocery Activism clarifies the critical importance of this period in transforming the politics and economics of the grocery store in America.

Craig Upright is associate professor of sociology at Winona State University. Before earning his PhD from Princeton University, he spent more than a decade working in the restaurant industry, including four years as the owner of a small coffee shop in St. Paul.

"Grocery Activism fills a gaping hole in the literature on food activism, and it’s one that my students often ask about: the radical origins of food cooperatives. Readers shocked by Amazon’s purchase of Whole Foods may well feel nostalgic for the cramped spaces and dusty bins of the 1970s food cooperatives that are the focus of this book."—Julie Guthman, author of Agrarian Dreams: The Paradox of Organic Farming in California*

"In the 1970s, the organic food movement needed to reach consumers, and food co-ops needed a reason to exist. Grasping the relationship between a social movement and an organizational form is not easy, but Grocery Activism achieves its aims in a clear, informative way. This book will interest anyone who wants to understand how local action can produce new and unexpected forms of market structure."—Kieran Healy, Duke University

"While his work hits the current social landscape at just a time and in just a place that may draw readers’ attention to the voices that are omitted, the text is rich in detail and insight and may serve as a springboard into further research and discussion."—Journal of Agriculture, Food Systems, and Community Development

"In an era defined by middle-class food obsessions, there is much to appreciate about this focused and thoughtful book."—Minnesota History

"A valuable resource for readers interested in the origins of today’s co-op stores and in the connections of organic food advocacy with other progressive political movements in the late-twentieth century."— Mobilization: An International Quarterly

"Upright’s work provides valuable insight into the contested nature of ‘natural’ food. "—The Annals of Iowa

"Upright has given us a refreshing, insightful, and highly readable account of how one movement exercised such a constitutive influence."—Political Science Quarterly

"A detailed study of what co-operatives actually are, not a fantasy of one kind or another."—May Day Books

"Grocery Activism is a fascinating look at how parallel movements gave rise to two big and important ideas—cooperatives and organics—as well as a subtle guide to how proponents of both might move forward in the era of Amazon."—Civil Eats

"Grocery Activism: The Radical History of Food Cooperatives in Minnesota dives back into the 1970s to paint a vivid image of the subversive world of organic groceries and food co-ops before the era of Whole Foods."—Agriculture and Human Values

"The book is a robust consideration of both the cooperative spirit and the cooperative economic form and how these propelled local-level collective action that altered the national food-related institutions that sustain us."—American Journal of Sociology

1. The Cause of Organic Food