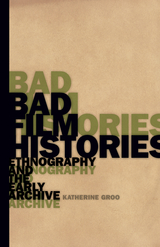 Bad Film Histories is a vital work that unsettles the authority of the archive. Katherine Groo daringly takes readers to the margins of the film record, addressing the undertheorization of film history and offering a rigorous corrective. Taking ethnographic cinema as a crucial case study, Groo challenges standard ways of thinking and writing about film history and questions widespread assumptions about what film artifacts are and what makes them meaningful. Rather than filling holes, Groo endeavors to understand the imprecisions and absences that define film history and its archives.

Bad Film Histories draws on numerous works of ethnographic cinema, from Edward S. Curtis’s In the Land of the Head Hunters, to a Citroën-sponsored “croisière” across Africa, to the extensive archives of the Maison Lumière and the Musée Albert-Kahn, to dozens of expedition films from the 1910s and 1920s. The project is deeply grounded in poststructural approaches to history, and throughout Groo draws on these frameworks to offer innovative and accessible readings that explain ethnographic cinema’s destabilizing energies.

As Groo describes, ethnographic works are mostly untitled, unauthored, seemingly infinite in number, and largely unrestored even in their digital afterlives. Her examination of ethnographic cinema provides necessary new thought for both film scholars and those who are thrilled by cinema’s boundless possibilities. In so doing, she boldly reexamines what early ethnographic cinema is and how these films produce meaning, challenging the foundations of film history and prevailing approaches to the archive.

Katherine Groo is assistant professor of film and media studies at Lafayette College.

"Stimulating and necessary . . . Bad Film Histories makes an important theoretical intervention into early cinema history. Katherine Groo prompts us to question our assumptions—to throw away the film-historical map—and to keep moving along multiple trajectories."—Alice Maurice, author of The Cinema and Its Shadow: Race and Technology in Early Cinema

"With this book, Katherine Groo establishes the necessary and productive incoherence of film historical inquiry by insisting on certain structuring non-relations between artifact and historical knowledge, between ethnographic subject and scientific investigator, between film and its content, and between the world and its index. Bad Film Histories devastatingly reveals how our current film historical knowledge is entirely without basis, leaving us to wonder what today might constitute an adequate account of the cinema; the solution—as Groo brilliantly argues—is that this is precisely the wrong question to ask."—Mark Lynn Anderson, author of Twilight of the Idols: Hollywood and the Human Sciences in 1920s America