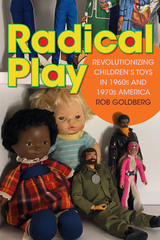 Radical Play: Revolutionizing Children’s Toys in 1960s and 1970s America
by Rob Goldberg
Duke University Press, 2023
Paper: 978-1-4780-2511-5
Cloth: 978-1-4780-2013-4
eISBN: 978-1-4780-2710-2
In Radical Play Rob Goldberg recovers a little-known history of American children’s culture in the 1960s and 1970s by showing how dolls, guns, action figures, and other toys galvanized and symbolized new visions of social, racial, and gender justice. From a nationwide movement to oppose the sale of war toys during the Vietnam War to the founding of the company Shindana Toys by Black Power movement activists to the efforts of feminist groups to promote and produce nonsexist and racially diverse toys, Goldberg returns readers to a defining moment in the history of childhood when politics, parenting, and purchasing converged. Goldberg traces not only how movement activists brought their progressive politics to the playroom by enlisting toys in the era’s culture wars, but also how the children’s culture industry navigated the explosive politics and turmoil of the time in creative and socially conscious ways. Outlining how toys shaped and were shaped by radical visions, Goldberg locates the moment Americans first came to understand the world of toys—from Barbie to G.I. Joe—as much more than child’s play.
AUTHOR BIOGRAPHY
Rob Goldberg is Head of the History Department at Germantown Friends School.