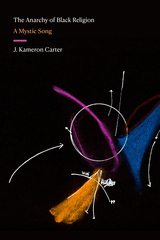 In The Anarchy of Black Religion, J. Kameron Carter examines the deeper philosophical, theological, and religious history that animates our times to advance a new approach to understanding religion. Drawing on the black radical tradition and black feminism, Carter explores the modern invention of religion as central to settler colonial racial technologies wherein antiblackness is a founding and guiding religious principle of the modern world. He, therefore, sets black religion apart from modern religion, even as it tries to include and enclose it. Carter calls this approach the black study of religion. Black religion emerges not as doctrinal, confessional, or denominational, but as a set of poetic and artistic strategies of improvisatory living and gathering. Potentiating non-exclusionary belonging, black religion is anarchic, mystical, and experimental: it reveals alternative relationalities and visions of matter that can counter capitalism’s extractive, individualistic, and imperialist ideology. By enacting a black study of religion, Carter elucidates the violence of religion as the violence of modern life while also opening an alternate praxis of the sacred.
AUTHOR BIOGRAPHY
J. Kameron Carter is Professor of Religious Studies at Indiana University Bloomington and is codirector of IU’s Center for Religion and the Human. He is the author of Race: A Theological Account.
REVIEWS
“J. Kameron Carter’s claim that the modern western formulations of racial capitalism and religion go hand in hand renders it impossible to think the one without the other. His interventions in this ambitious, rich, and imaginative book have the power to change the study of religion as a whole and in tremendously salutary, necessary ways.”

-- Amy Hollywood, author of Acute Melancholia and Other Essays: Mysticism, History, and the Study of Religion
TABLE OF CONTENTS