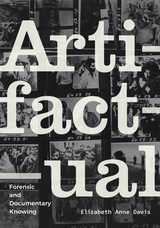 In Artifactual, Elizabeth Anne Davis explores how Cypriot researchers, scientists, activists, and artists process and reckon with civil and state violence that led to the enduring division of the island, using forensic and documentary materials to retell and recontextualize conflicts between and within the Greek-Cypriot and Turkish-Cypriot communities. Davis follows forensic archaeologists and anthropologists who attempt to locate, identify, and return to relatives the remains of Cypriots killed in those conflicts. She turns to filmmakers who use archival photographs and footage to come to terms with political violence and its legacies. In both forensic science and documentary filmmaking, the dynamics of secrecy and revelation shape how material remains such as bones and archival images are given meaning. Throughout, Davis demonstrates how Cypriots navigate the tension between an ethics of knowledge, which valorizes truth as a prerequisite for recovery and reconciliation, and the politics of knowledge, which renders evidence as irremediably partial and perpetually falsifiable.
AUTHOR BIOGRAPHY
Elizabeth Anne Davis is Associate Professor of Anthropology at Princeton University and author of Bad Souls: Madness and Responsibility in Modern Greece, also published by Duke University Press.
REVIEWS
“Artifactual is a brilliant exploration of knowledge production through forensic science and documentary filmmaking in postwar Cyprus. Raising penetrating questions about knowledge and the making of truth and evidence in anthropology, Elizabeth Anne Davis makes significant contributions to the anthropologies of missing persons, forensics, and visual anthropology.”

-- Yael Navaro, author of The Make-Believe Space: Affective Geography in a Postwar Polity
TABLE OF CONTENTS