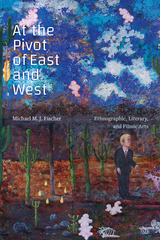 At the Pivot of East and West: Ethnographic, Literary, and Filmic Arts
by Michael M. J. Fischer
Duke University Press, 2023
eISBN: 978-1-4780-2446-0
Cloth: 978-1-4780-1718-9
Paper: 978-1-4780-1989-3
In At the Pivot of East and West, Michael M. J. Fischer examines documentary filmmaking and literature from Southeast Asia and Singapore for their para-ethnographic insights into politics, culture, and aesthetics. Women novelists—Lydia Kwa, Laksmi Pamuntjak, Sandi Tan, Jing Jing Lee, and Danielle Lim—renarrate Southeast Asian generational and political worlds as gendered psychodramas, while filmmakers Tan Pin Pin and Daniel Hui use film to probe into what can better be seen beyond textual worlds. Other writers like Daren Goh, Kevin Martens Wong, and Nuraliah Norasid reinvent the detective story for the age of artificial intelligence, use monsters to reimagine the Southeast Asian archipelago, and critique racism and the erasure of ethnic cultural histories. Continuing his project of applying anthropological thinking to the creative arts, Fischer exemplifies how art and fiction trace how taken-for-granted common sense changes over time, speak to the transnational present, and track signals of the future before they surface in public awareness.
AUTHOR BIOGRAPHY
Michael M. J. Fischer is Andrew W. Mellon Professor in the Humanities and Professor of Anthropology and Science and Technology Studies at the Massachusetts Institute of Technology. He is the author of numerous books, including Probing Arts and Emergent Forms of Life and Anthropology in the Meantime: Experimental Ethnography, Theory, and Method for the Twenty-First Century, both also published by Duke University Press.