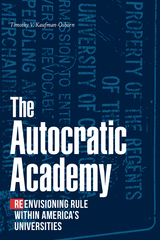 Critics of contemporary US higher education often point to the academy’s “corporatization” as one of its defining maladies. However, in The Autocratic Academy Timothy V. Kaufman-Osborn argues that American colleges and universities have always been organized as corporations in which the power to rule is legally vested in and monopolized by antidemocratic governing boards. This institutional form, Kaufman-Osborn contends, is antithetical to the free inquiry that defines the purpose of higher education. Tracing the history of the American academy from the founding of Harvard (1636), through the Supreme Court’s Dartmouth v. Woodward ruling (1819), and into the twenty-first century, Kaufman-Osborn shows how the university’s autocratic legal constitution is now yoked to its representation on the model of private property. Explaining why appeals to the cause of shared governance cannot succeed in wresting power from the academy’s autocrats, Kaufman-Osborn argues that American universities must now be reincorporated in accordance with the principles of democratic republicanism. Only then can the academy’s members hold accountable those chosen to govern and collectively determine the disposition of higher education’s unique public goods.
AUTHOR BIOGRAPHY
Timothy V. Kaufman-Osborn is Baker Ferguson Professor of Politics and Leadership Emeritus at Whitman College and author of From Noose to Needle: Capital Punishment and the Late Liberal State and Creatures of Prometheus: Gender and the Politics of Technology.
TABLE OF CONTENTS


Acknowledgments  vii
A Prologue in the Form of a Puzzle  1
I. Nibbling at the Crust of Convention
1. Imperious Regents and Disposable Custodians  11
2. The Neoliberal Corporation Debunked  30
3. Corporate Types   47
II. Contesting the Constitution of College in Early America
4. William & Mary Dispossessed  63
5. “The College of Tyrannus”  82
6. The Marshall Plan  105
III. A Bet Gone Bad
7. Psychasthenia Universitatis (or The Malady of the Academy)  135
8. “Shared Governance” as Placebo  163
IV. When Autocrats Meet Their Makers
9. Outsourcing Self-Governance   197
10. “Humpty Dumpty Sat on a Wall . . .”  231
Epilogue: Reenvisioning the Corporate Academy  255
Notes  273
Bibliography  307
Index  327