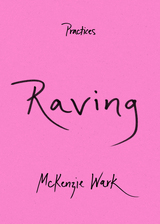 What is an art of life for what feels like the end of a world? In Raving McKenzie Wark takes readers into the undisclosed locations of New York’s thriving underground queer and trans rave scene. Techno, first and always a Black music, invites fresh sonic and temporal possibilities for this era of diminishing futures. Raving to techno is an art and a technique at which queer and trans bodies might be particularly adept but which is for anyone who lets the beat seduce them. Extending the rave’s sensations, situations, fog, lasers, drugs, and pounding sound systems onto the page, Wark invokes a trans practice of raving as a timely aesthetic for dancing in the ruins of this collapsing capital.
AUTHOR BIOGRAPHY
McKenzie Wark is the author of Capital Is Dead, Reverse Cowgirl, and The Beach beneath the Street, among other books.
REVIEWS
"McKenzie Wark is one of today’s finest critics on the subject of bodies, sex, gender, and, as of now, the venue that brings them all together: the rave. . . . Few are better than Wark at capturing how it feels to be in a body with so much intelligence and humor. Here, she argues for raving as a vital trans aesthetic, a way to dance — literally — over the crumbling foundations of capitalism."