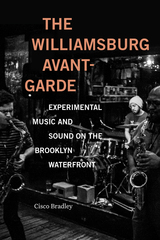 In The Williamsburg Avant-Garde Cisco Bradley chronicles the rise and fall of the underground music and art scene in the Williamsburg neighborhood of Brooklyn between the late 1980s and the early 2010s. Drawing on interviews, archival collections, musical recordings, videos, photos, and other ephemera, Bradley explores the scene’s social, cultural, and economic dynamics. Building on the neighborhood’s punk DIY approach and aesthetic, Williamsburg's free jazz, postpunk, and noise musicians and groups---from Mary Halvorson, Zs, and Nate Wooley to Matana Roberts, Peter Evans, and Darius Jones---produced shows in a variety of unlicensed venues as well as in clubs and cafes. At the same time, pirate radio station free103point9 and music festivals made Williamsburg an epicenter of New York’s experimental culture. In 2005, New York’s rezoning act devastated the community as gentrification displaced its participants farther afield in Brooklyn and in Queens. With this portrait of Williamsburg, Bradley not only documents some of the most vital music of the late twentieth and early twenty-first centuries; he helps readers better understand the formation, vibrancy, and life span of experimental music and art scenes everywhere.
AUTHOR BIOGRAPHY
Cisco Bradley is Associate Professor of History at the Pratt Institute and author of Universal Tonality: The Life and Music of William Parker, also published by Duke University Press.
REVIEWS
"The Williamsburg Avant-Garde is the most comprehensive study to date of one of the most important music scenes of the past 30-plus years."