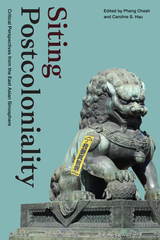 The contributors to Siting Postcoloniality reevaluate the notion of the postcolonial by focusing on the Sinosphere—the region of East and Southeast Asia that has been significantly shaped by relations with China throughout history. Pointing out that the history of imperialism in China and Southeast Asia is longer and more complex than Euro-American imperialism, the contributors complicate the traditional postcolonial binaries of center-periphery, colonizer-colonized, and developed-developing. Among other topics, they examine socialist China’s attempts to break with Soviet cultural hegemony; the postcoloniality of Taiwan as it negotiates the legacy of Japanese colonial rule; Southeast Asian and South Asian diasporic experiences of colonialism; and Hong Kong’s complex colonial experiences under the British, the Japanese, and mainland China. The contributors show how postcolonial theory’s central concepts cannot adequately explain colonialism in the Sinosphere. Challenging fundamental axioms of postcolonial studies, this volume forcefully suggests that postcolonial theory needs to be rethought.

Caroline S. Hau is Professor of Southeast Asian Studies at Kyoto University and author of The Chinese Question: Ethnicity, Nation, and Region in and beyond the Philippines.
TABLE OF CONTENTS