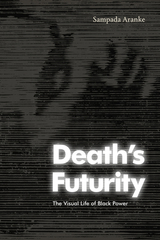 In Death’s Futurity Sampada Aranke examines the importance of representations of death to Black liberation. Aranke analyzes posters, photographs, journalism, and films that focus on the murders of Black Panther Party members Lil’ Bobby Hutton, Fred Hampton, and George Jackson to construct a visual history of the 1960s and 1970s Black Power era. She shows how Black radicals used these murders to engage in political action that imagined Black futurity from the position of death. Photographs of Hutton that appeared on flyers and posters called attention to the condition of his death while the 1971 documentary The Murder of Fred Hampton enabled the consideration of Hampton’s afterlife through visual meditations on his murder. Printmaking and political posters surrounding Jackson’s murder marked the transition from Black Power to the prison abolition movement in ways that highlighted the relationship between surveillance, policing, incarceration, and anti-Black violence. By foregrounding the photographed, collaged, filmed, and drawn Black body, Aranke demonstrates that corporeality and corpses are crucial to the efforts to shape visions of a Black future free from white supremacy.
AUTHOR BIOGRAPHY
Sampada Aranke is Assistant Professor of Art History, Theory, and Criticism at the School of the Art Institute of Chicago.
TABLE OF CONTENTS