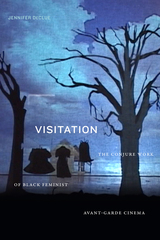 In Visitation, Jennifer DeClue shows how Black feminist avant-garde filmmakers draw from historical archives in order to visualize and reckon with violence suffered by Black women in the United States. DeClue argues that these filmmakers—including Kara Walker, Kara Lynch, Tourmaline, and Ja’Tovia Gary—create spaces of mourning and reckoning rather than voyeurism and pornotropy. Through their use of editing, performance, and cinematic experimentation, these filmmakers intervene in the production of Blackness and activate new ways of seeing Black women and telling their stories. Theorizing these films as a form of conjure work, DeClue shows how these filmmakers raise the specters of Black women from the past and invite them to reveal history from their point of view. In so doing, Black feminist avant-garde filmmakers channel spirits that haunt archives and create cinematic arenas for witnessing Black women battling for survival during pivotal and exceedingly violent moments in US history.


Acknowledgments  vii
Introduction. Visitation  1
1. The Archive and the Silhouette: Framing Black Feminist Avant-Garde Cinema  29
2. Reckoning at the Bridge: Saved and the Archive of Laura Nelson  65
3. Carrying the Knowledge / Performing the Archive: An Afternoon with Marsha P. Johnson  99
4. Ecstasy and the Archive: A Black Feminist Phenomenology of Freedom  143
Coda. On Tenderness  183
Notes  187
Bibliography  211
Index  221