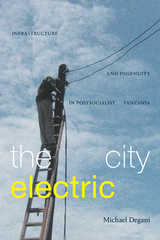 Over the last twenty years of neoliberal reform, the power supply in Dar es Salaam, Tanzania’s metropolis, has become less reliable even as its importance has increased. Though mobile phones, televisions, and refrigerators have flooded the city, the electricity required to run these devices is still supplied by the socialist-era energy company Tanesco, which is characterized by increased fees, aging infrastructure, and a sluggish bureaucracy. While some residents contemplate off-grid solutions, others repair, extend, or tap into the state network with the assistance of freelance electricians or moonlighting utility employees. In The City Electric Michael Degani explores how electricity and its piracy has become a key site for urban Tanzanians to enact, experience, and debate their social contract with the state. Moving from the politics of generation contracts down to the street-level experience of blackouts and disconnection patrols, he reveals the logics of infrastructural modification and their effects on everyday life. As politicians, residents, electricians, and utility inspectors all redistribute flows of payment and power, they reframe the energy grid both as a technical system and as an ongoing experiment in collective interdependence.
AUTHOR BIOGRAPHY
Michael Degani is Assistant Professor of Anthropology at Johns Hopkins University.
TABLE OF CONTENTS