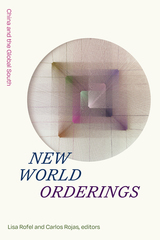 The contributors to New World Orderings demonstrate that China’s twenty-first-century rise occurs not only through economics and state politics but equally through the mutual entanglements of overlapping social, economic, and cultural worlds in Southeast Asia, Africa, and Latin America. They show how the Chinese state has sought to reconfigure the nation’s position in the world and the centrality of trade, labor, religion, migration, gender, race, and literature to this reconfiguration. Among other topics, the contributors examine China’s post-Bandung cultural diplomacy with African nations, how West African “pastor-entrepreneurs” in China interpreted and preached the prosperity doctrine, the diversity of Chinese-Argentine social relations in the soy supply chain, and the ties between China and India within the complex history of inter-Asian exchange and Chinese migration to Southeast Asia. By examining China’s long historical relationship with the Global South, this volume presents a non-state-centric history of China that foregrounds the importance of transnational communicative and imaginative worldmaking processes and interactions.

Carlos Rojas is Professor of Asian and Middle Eastern Studies at Duke University and author of Homesickness: Culture, Contagion, and National Transformation in Modern China.
TABLE OF CONTENTS