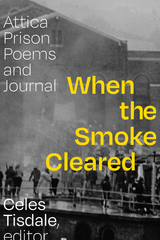 Following the Attica prison uprising in September 1971, Celes Tisdale—a poet and then professor at Buffalo State College—began leading poetry workshops with those incarcerated at Attica. Tisdale’s workshop created a space of radical Black creativity and solidarity, in which poets who lived through the uprising were able to turn their experiences into poetry. The poems written by Tisdale’s students were published as Betcha Ain’t: Poems from Attica in 1974. When the Smoke Cleared contains the entirety of Betcha Ain’t, Tisdale’s own poems and journal entries from the three years he taught at Attica, a previously unpublished collection of poems by Attica poets, and a critical introduction by poet Mark Nowak. In addition to the poetry, Tisdale’s journal entries give readers a unique opportunity to experience what it was like to enter Attica as an educator and return week after week to discuss poetry. When the Smoke Cleared showcases these poets’ achievements, their desire for self-determination, and their historical role as storytellers of Black life in a prison monitored exclusively by white guards and administrators.
AUTHOR BIOGRAPHY
Celes Tisdale is Distinguished Emeritus Professor of English at the State University of New York at Buffalo and editor of Betcha Ain’t: Poems from Attica and We Be Poetin’.
REVIEWS
"When the Smoke Cleared . . . beautifully documents what it means to bear witness while teaching, and the great responsibility that comes with ushering voices from the inside of prison walls to the outside. . . . When the Smoke Cleared is a time capsule of the sharp minds, open hearts, and courageous souls of men brutalized by the United States criminal justice system."

"When the Smoke Cleared . . . reveals a great deal about survival in the wake of state violence and about the uses of prison education. . . . Supporting efforts like Tisdale’s are important, not because they reform the institution, but because they can aid incarcerated people in building inside-outside relations and solidaristic organizing across facilities."