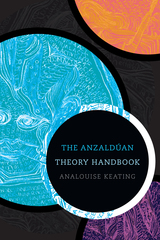 In The Anzaldúan Theory Handbook AnaLouise Keating provides a comprehensive investigation of the foundational theories, methods, and philosophies of Gloria E. Anzaldúa. Through archival research and close readings of Anzaldúa’s unpublished and published writings, Keating offers a biographical-intellectual sketch of Anzaldúa, investigates her writing process and theory-making methods, and excavates her archival manuscripts. Keating focuses on the breadth of Anzaldúa’s theoretical oeuvre, including Anzaldúa’s lesser-known concepts of autohistoria y autohistoria-teoría, nos/otras, geographies of selves, and El Mundo Zurdo. By investigating those dimensions of Anzaldúa’s theories, writings, and methods that have received less critical attention and by exploring the interconnections between these overlooked concepts and her better-known theories, Keating opens additional areas of investigation into Anzaldúa’s work and models new ways to “do” Anzaldúan theory. This book also includes extensive definitions, genealogies, and explorations of eighteen key Anzaldúan theories as well as an annotated bibliography of hundreds of Anzaldúa’s unpublished manuscripts.
AUTHOR BIOGRAPHY
AnaLouise Keating is Professor of Multicultural Women’s and Gender Studies at Texas Woman’s University and the author of Transformation Now! Toward a Post-Oppositional Politics of Change and other books. She worked closely with Anzaldúa for more than a decade, editing Interviews/Entrevistas and coediting (with Anzaldúa) this bridge we call home. She has also edited Anzaldúa’s books posthumously, including Light in the Dark/Luz en lo Oscuro: Rewriting Identity, Spirituality, Reality, also published by Duke University Press.
TABLE OF CONTENTS