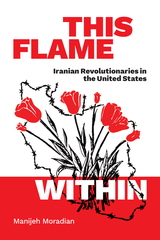 In This Flame Within Manijeh Moradian revises conventional histories of Iranian migration to the United States as a post-1979 phenomenon characterized by the flight of pro-Shah Iranians from the Islamic Republic and recounts the experiences of Iranian foreign students who joined a global movement against US imperialism during the 1960s and 1970s. Drawing on archival evidence and in-depth interviews with members of the Iranian Students Association, Moradian traces what she calls “revolutionary affects”—the embodied force of affect generated by experiences of repression and resistance—from encounters with empire and dictatorship in Iran to joint organizing with other student activists in the United States. Moradian theorizes “affects of solidarity” that facilitated Iranian student participation in a wide range of antiracist and anticolonial movements and analyzes gendered manifestations of revolutionary affects within the emergence of Third World feminism. Arguing for a transnational feminist interpretation of the Iranian Student Association’s legacy, Moradian demonstrates how the recognition of multiple sources of oppression in the West and in Iran can reorient Iranian diasporic politics today.
AUTHOR BIOGRAPHY
Manijeh Moradian is Assistant Professor in the Department of Women’s, Gender, and Sexuality Studies at Barnard College, Columbia University.
TABLE OF CONTENTS


Abbreviations  ix
Acknowledgments  xi
Introduction. Before We Were “Terrorists”  1
1. Revolutionary Affects and the Archive of Memory  33
2. Revolt in the Metropole  69
3. Making the Most of an American Education  95
4. The Feeling and Practice of Solidarity  128
5. Political Cultures of Revolutionary Belonging  176
6. Intersectional Anti-Imperialism: Alternative Genealogies of Revolution and Diaspora  215
Conclusion. Revolutionary Affects and the Remaking of Diaspora  247
Notes  275
Bibliography  301
Index  323